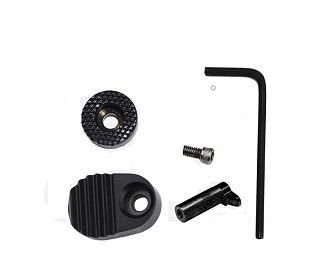 ***** PLEASE NOTE - LICENCE VERIFICATION REQUIRED PRIOR TO ORDER BEING RELEASED ******

The SW22® Victory™ is a popular rimfire pistol for Rimfire Challenge, Steel Challenge and other shooting sports competitions, and is great for beginner and junior shooters. But for young shooters, or other shooters with smaller hands, reaching the magazine release button while shooting can be a challenge. Even shooters with larger hands often struggle to easily and consistently release the magazine when adding thicker SW22® grips to their Smith & Wesson Victory™ pistol.


The “Titan” extended magazine release comes with two styles of magazine release for the ultimate custom fit: a round, textured button that is taller and slightly wider than the factory magazine release button and a larger, paddle button to extend the magazine release not only out and away from the gun, but also back toward the shooter. Install whichever release style works best for you!